Hellooooo! I'm running a tad late this week but am managing to catch up at last! Today I want to show you Ching-Chou's design "Exotic Halloween" which is from plate 11. I actually think this one has an ever so pretty face and really won't be limited to using in October.
I've coloured her with Promarkers, a little tip I picked up from from Randi in colouring in the candle is to continue colouring your image behind is as normal but with a lighter hand then go over the candle area several times with the colourless blender. I've also then added sakura stardust in clear all around the candle and the inside I went over with a copic spica clear pen. I've also added sakura stardust highlights in clear and orange and also the sakura glaze pen over the eyes and lips.

The background I've coloured with promarkers adding lots of the blender then colour then running it in with my finger for a nice subtle blend.

I've made a gatefold ATC and the panels are made with starburst stains which I've run through the cuttlebug using the divine swirls embossing folder. The door handles were large white sticky pearls i've coloured with black diamond stickles.

I make lots of ATC's this time of year as I go to the Port Sunlight stamp show so if you're outside about 1pm I'll have several sweet pea ones available to trade :) Can't miss me, black hair with plum streaks, black boots with bright pink laces :D 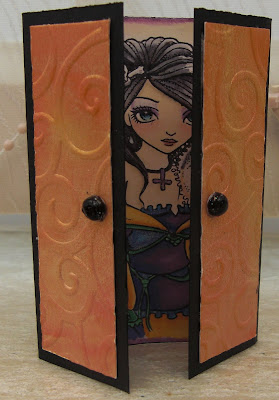 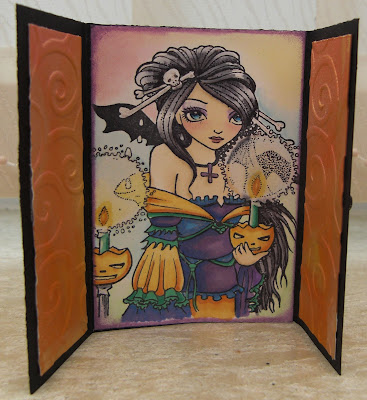 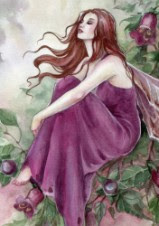